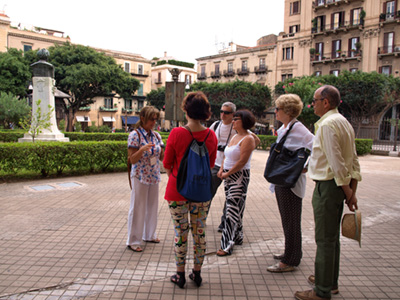 We met Bianca at the Teatro Massimo, and then, in a matter of about 4.5 hours, we walked the streets and squares of the ancient city. We visited markets, a traditional painted carts maker, Cathedral, Capella Palatina, Steri, or museum of the Inquisition, and the Jewish quarter. We also visited the places connected to The Leopard– the film, the novel, and its author – in short, covering an itinerary that most people do in a week.  But the speed and the long list of attractions do not matter. What does is the depth of our experience we were literally living through during this excursion. What Bianca did was nothing short of brilliant: she took us through three thousand years of Sicilian history, demonstrating, first on the example of the Cathedral and then elsewhere in the city, how the “sicilitude” or a “culture apart” was formed in this most unique of Mediterranean islands.

If Sicily (and its capital Palermo) geographically and administratively is indeed a part of Italy, the Sicilians culturally, linguistically, and intellectually, are not Italians.  They created and inhabit their own world where the past – Phoenician, Greek, Roman, Byzantine, Jewish, Arabic, Norman, French, Spanish – is never rejected but accepted and truly embraced. Only in Sicily, a paradise for any art lover, one can see and experience a successful harmonization of so many different influences into a perfect work of art. This not only includes the mosaics and architecture, but also the country itself and its people.

As an art historian and a tour guide, I bow to my Palermian friend Bianca, a Guide par Excellence!

To contact Bianca Del Bello for a truly unforgettable experience in Palermo, write to her directly at biancapalermo@simail.it or call her at 338.165.0832

Read our stories from Europe, Asia, and Africa.