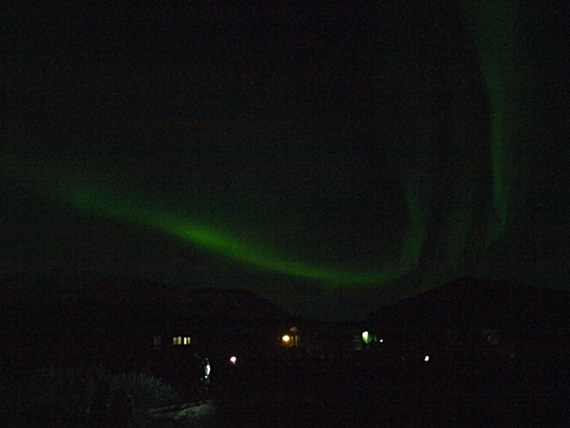 In addition to the time of the year, there are several other components essential for seeing the northern lights. First, the surroundings have to be as dark as possible, meaning you have to be far away from Reykjavik, or other areas where humans light the skies with their electric bulbs. Next, the weather has to be just right: clear skies and a cold night are the best combination. Your viewing location is also important: on the same night, one lucky group of tourists might be rewarded for freezing in the open for hours with a fantastic light show, but another unlucky bunch just a two-hour drive away will be turning into icicles for nothing.

Speaking of luck, it increases substantially if you stay in Iceland for at least a week and have all or most nights available to chase the northern lights. As it happens, northern lights have a nasty habit of showing up for a day or two and taking a few days off to rest. The good news is that once you book a Northern Lights excursion through one of the bus companies, they will keep taking you on the northern lights chase until you see the lights, or decide to quit and go home.  But even then, the tickets are good for two years – come back to Iceland and hop on board to continue your quest.

This generosity of the Gray Line Iceland tour company turned out to be our lucky number. After driving from one observation point to another for hours, we returned to our Hotel Borg after 2 AM with only three nighttime photos in my camera: the moon, a boat, and a lighthouse. However, after we boarded the Gray Line Iceland tour bus the following night, Nature reworded our persistence with one of the most spectacular phenomena.

Yeah, yeah, we all saw those highly Photoshopped multi-colored northern light images. What we saw however, were mostly whitish patterns that appeared, disappeared, and morphed into new shapes on the background of the black sky. Digital camera sensors painted those fantastic patterns green.  Out of the three necessary night photography components (a good tripod, a remote shutter release, and knowing what you are doing), I possessed only the first one – the tripod. The shutter release cable I bought a couple of days before the trip did not fit my camera, even though it was “designed” for my model by those creative engineers. My non-existent night photography skills acquired on the brightly lit squares of European capitals at night were as useless as the cable that I tried to exchange the night before the trip. Another factor that did not help was our location: we observed the northern lights over the ocean, and the water vapors made the air less clear. So when you look at the photos, just keep in mind that the northern lights are indeed spectacular!