Our exploration of Sicily began in Palermo, the main city of the island. Irene’s heroic efforts to prepare me for the trip paid off: I read Lonely Planet’s click this Sicily cover to cover, but Palermo came to life only when our friend and guide Bianca Del Bello took our small group on a walking tour of Palermo.

The Phoenicians founded this city in the 8th century B.C. Then came the Carthaginians and Greeks, followed by the Romans. The Byzantine Empire claimed Sicily after the fall of Rome and held it for over one thousand years. In the 9th century AD, the Arabs grabbed Sicily for a couple hundred years, but lost it to the Normans. Not to be outdone, the Germans, French, and Spanish all had their chance in Sicily. Following Italy’s unification in 1860, Palermo became the capital of the autonomous region of Sicily.

Changing so many hands over the centuries left profound traces on the island’s population, culture, art, music, food, and architecture, which made Palermo a prime tourist destination, rich with history, culture, art, and food choices. Driving in the city is rather nerve-wracking, but exploring the historical area on foot is a great experience. In addition to several museums and art galleries, opera lovers will find first-rate opera productions at the Teatro Massimo Opera House. Not to be missed is the Cathedral of Monreale, located in the city of Monreale, which is only a short drive south-west from downtown Palermo. 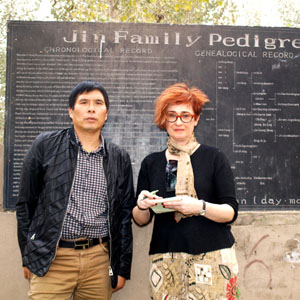 October 2012, Again – Kaifeng, China. We are at the oldest Jewish burial place in China – with Mr. Jin in front of his life-long project, his family memorial.

Our new friend dedicated his life savings and his entire life to create this marble memorial book which presents – engraved in English on one side and in Chinese on another – the 900-year story of Mr. Jin’s family within the context of Chinese history. “Chronological” (narrative) and “Genealogical” (family tree) records, written there large and flamboyant, and in stone.  True to the Confucian culture of their country, Jin’s family kept their genealogical records for many centuries. When the government confiscated records, a secretly made copy of it was securely hidden. And then – reborn as Mr. Jin’s marble monument to his ancestors and to the eternal Jewish spirit.

weblink Read more in my article…