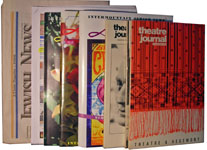 Irene is the author of two books on the history of theater, drama, and intercultural interpretations.
Her third book The Dao of Being Jewish and Other Stories was published in January, 2016.

Alex Shaland started his writing career in the 1990s, contributing articles and book chapters for several Penton Publishing periodicals and other publications. In addition to his own writing, he collaborated as an editor and photographer with his wife, Irene Shaland, in producing several books and articles published in numerous magazines in the U.S., Canada, U.K., and East Africa.  Shaland’s photographs have appeared in over 20 publications and online sources including Holiday Magazine (France/U.K.),The Boston Forward, Tikkun, ZEEK, Diarna Digital Heritage Mapping, Hackwriters(U.K.), IMAGE Magazine, ROMAR Travel, Design World Magazineand other journals printed in the U.S., Canada, U.K., Korea, and Kenya. An award-winning photographer, Shaland had several solo photography shows and participated in group exhibitions organized in New York, New Jersey, Michigan, and Ohio.

Alex’s book, Suburbanites on Safari, was published in April of 2019.