SPACE STATION REVISITED: THE TRIAL OF THE AMERICAN MIND

”Mom, are you really going to build the space station?”- struggling through her tears asked my seven-year-old Michelle as we parted at the airport. “I will certainly try,” I said. And so trying I  was, being  “drafted” to Washington D.C to work as an interpreter and facilitator for the NASA Space Station Redesign Team during the visit of the Russian delegation. I was living through what seems now the most intensive and exciting three weeks of my life. Continue reading:  Space Station Revisited 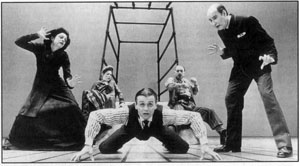 “Sometimes I feel I understand the Fall of Man better than anyone,” Franz Kafka once said. In his theatrical adaptation of Metamorphosis, director Steven Berkoff continues the Kafkaesque exploration of man’s moral condition, believing that though dangerous, it is as necessary now as it ever was. The whole art of Kafka persists in forcing us to reread him. If he ever suggests any explanations, they are not revealed in clear language, thus they require that the work be reread from another point of view. Berkoff’s Metamorphosis proves a point in doing this, if only in order to gain the courage for taking another look at, as Kafka puts it, “the horror of life – the terror of art.” Continue reading..