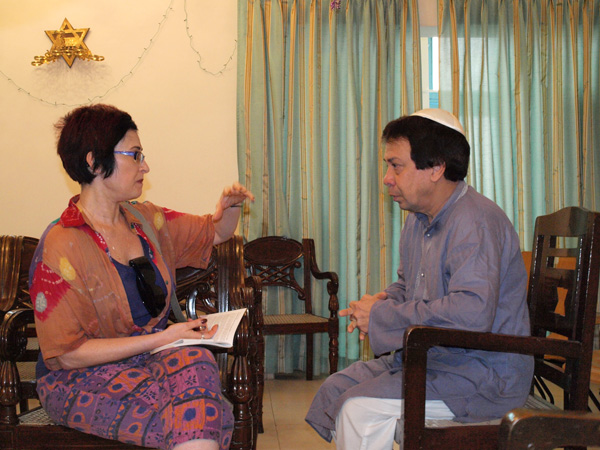 Global Response to the Holocaust Part II: From Europe to Asia: Norway, Sweden, China, and India

We are in Scandinavia, where during WWII almost the entire Danish Jewish community and close to half-of the Norwegian Jews were smuggled to neutral Sweden and saved from the Nazis. In our quest to understand both Norwegian and Swedish responses to the Holocaust, we go to Oslo and Stockholm to the Jewish Museum of Oslo, located in the old synagogue building on Calmeyer Street in the center of the city. We examine how this area was traditionally an immigrant enclave. Today only the Stolpersteine or memorial brass cobblestones with the victims’ names, dates of birth and deportation, attest to the destruction of the Oslo Jewry.

Our next stop is the Center for Studies of Holocaust and Religious Minorities located in Bygdoy neighborhood. It has a giant sculpture that resembles a punch card, called the “Innocent Questions:” the shifting words and phrases of a giant punch card are connected to personal data,” innocent” perhaps at a first glance, but used to facilitate mass murder of Norwegian Jews. What makes the Center’s exhibit different is its focus on the role Norwegians played in the mass murder of their former neighbors and co-workers.

To see a more complete picture of the Jewish story within a Scandinavian context, we have to go to Sweden, the country that during World War II was a safe haven for most of the Scandinavian Jewry. In Stockholm, we explore the role Sweden played in saving not only the Jews from Denmark and Norway but also from Eastern European countries via the Swedish Red Cross White Buses project and the controversial Rail Wallenberg Memorial.

Going to Asia, we will follow India’s Jewish narrative and meet the world’s oldest, continuously living Jewish community. We also visit the best-kept secret in Delhi, its one room synagogue and talk to the Rabbi/Cantor/Attorney/Hebrew scholar Ezekiel Malekar who relates a little-known story about India’s lives-saving role during the Holocaust.

Arriving in China, we start with a brief discussion of the Chinese Jewish narrative that consists of two distinctive stories: one is about the Jews OF China (Silk Road, Kaifeng, Luoyang) and another is about  the Jews IN China (Harbin, Shanghai). In Shanghai, we explore this city, an archetype of modern China. We follow the Jewish heritage path there: from the first arrivals of the Baghdadi Jews in the 1840s, to the Russian wave in the 1920s-30s, to Shanghai becoming a safe haven during the Holocaust. Then, the path continues to the Japanese invasion and the creation of the “Restricted Sector for Stateless Refugees” or Shanghai Ghetto. We visit numerous Jewish-related sites such as the Ohel Rachel Synagogue (now Education Bureau), the Jewish Refugee Museum (former Ohel Moshe Synagogue), the houses in the former Ghetto, and the recently created Memorial Wall to the Shanghai WWII refugees.

Our presenter Irene Shaland is the author of “The Dao of Being Jewish and Other Stories” and a multitude of magazine articles published in the US, Canada, the UK, and Israel. She regularly presents at conferences, museums, universities, special-interest group events, and other venues throughout the country.

See all lectures we offer.