Overlooked by visitors, Catania is a masterpiece of Sicilian Baroque 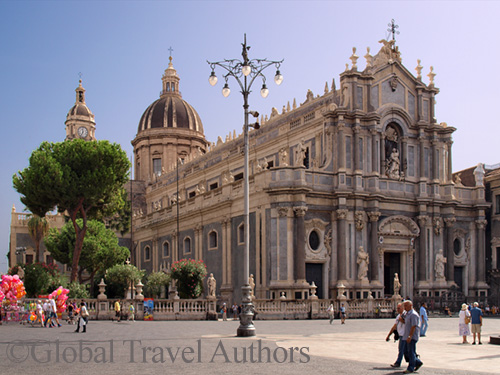 The Majestic Duomo of Catania – a World Heritage site

Today, many visitors skip Catania for the sake of Taormina or Siracusa and this is a sad mistake. The city radiates a strange romantic beauty with its broad boulevards and spacious squares, grandiose palazzos, and great cathedrals, still striking in their black and white colors, lava and limestone, crumbling plaster, and cracked marble columns.

Renowned composer Vincenzo Bellini, born and bred in Catania, is buried in the city’s main cathedral, the Duomo. His presence is felt everywhere: monuments, a house-museum, and even in a beloved Sicilian dish-Pasta dela Norma is named after Bellini’s world-famous opera.

Founded by the Greeks in the 8th century BC, Catania became the most prosperous Sicilian city during the Roman age, and still boasts not one but two Roman amphitheaters: the smaller one, near Piazza St. Francesco d’Assisi, was built, as Romans often did, on top of a Greek theater, but the larger one, the largest in Sicily, was a Roman original, and could accommodate 16,000 spectators.  Now we can admire parts of that great structure near Piazza Stesicoro.

The majestic 13th-century Ursino Castello, built on the orders of Emperor Frederick II von Hohenstaufen, is the only city structure not destroyed by Etna. The castle was designed to be the city’s guardian, situated on the top of a seafront cliff, but the volcano changed the landscape and the Castello is now landlocked. Inside the Castello is the city museum, Museo Civico, but the most interesting feature of the castle is outside: near the front gates, its massive wall displays a menorah laid out in small black lava stones like a mosaic. Perhaps the Jews working on the construction wanted to write their own page in the city’s history.

Catania’s main square with the Duomo in its center is a World Heritage site, and is dazzling in its majestically theatrical beauty. Here is Catania at its best, showcasing its black lava-while limestone baroque grandeur. In front of the Duomo, is Fontana dell’Elephante, a funny black lava elephant that smiles at us while carrying a huge Egyptian obelisk on its back.

If you are willing, Catania, this special city, will unveil its treasures for you. 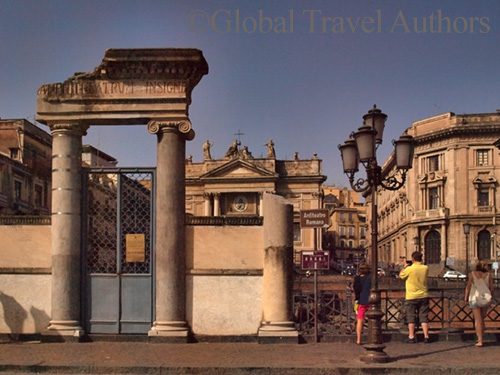 Two Roman pillars mark the entrance to the remains of Anfiteatro Romano, the largest in Sicily 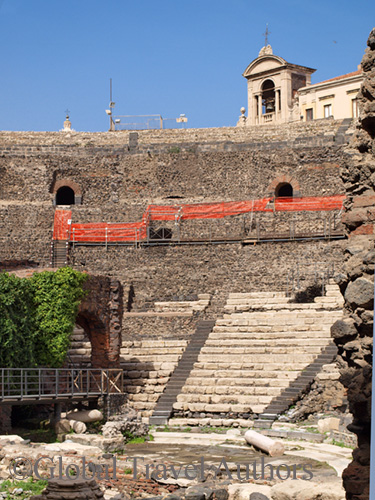 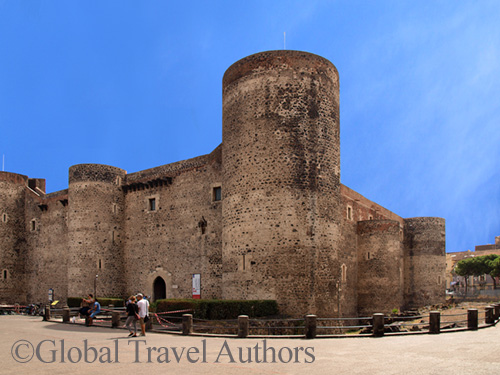 The early 13th century’s Castello Ursino: the only building not ruined by Etna’s earthquake in the late 1600s 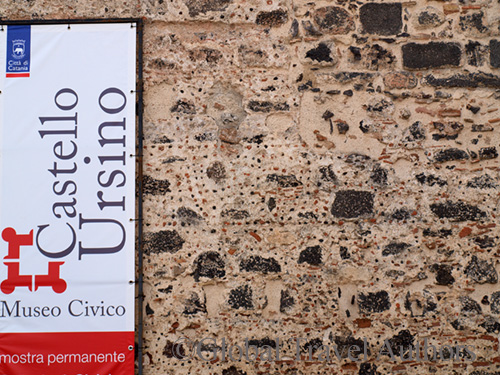 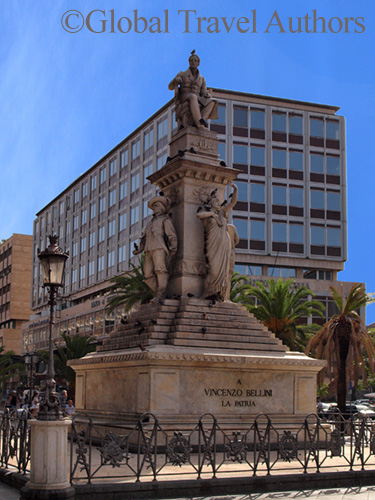 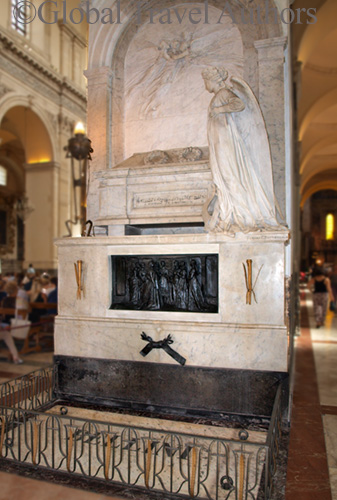 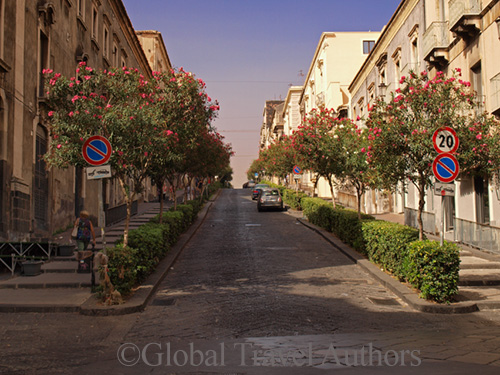 Beautiful pedestrians-only boulevard in the old historic center of Catania 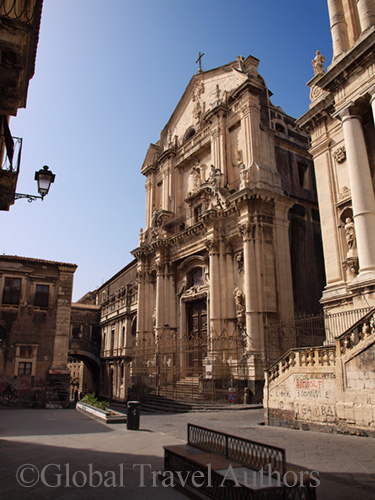 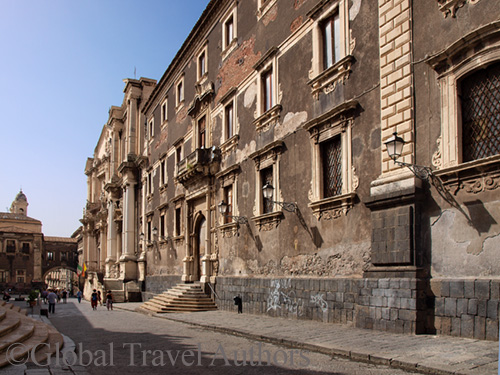 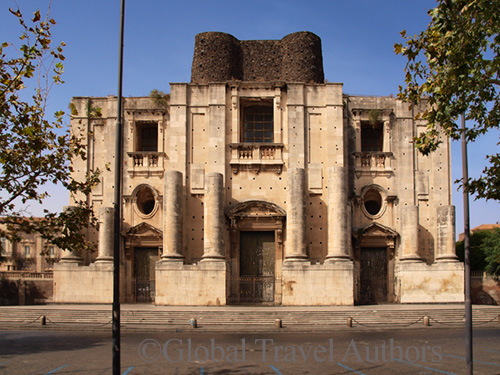 Never-completed San Nicolo church, the largest in Sicily and also the strangest 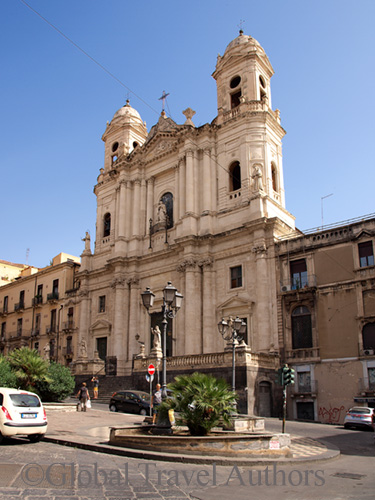 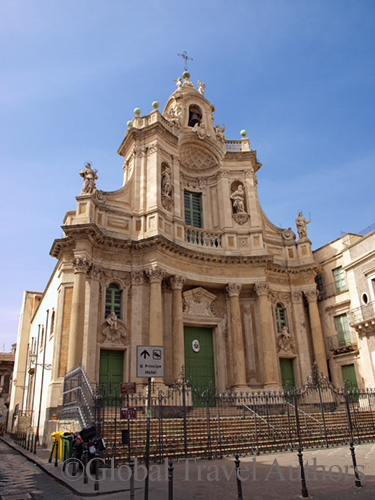 Theatricality of Catania’s baroque: the cathedrals seem to be dancing on the streets 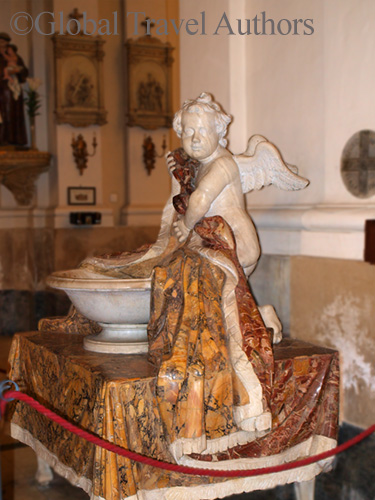 Marble angel in one of Catania’s baroque churches 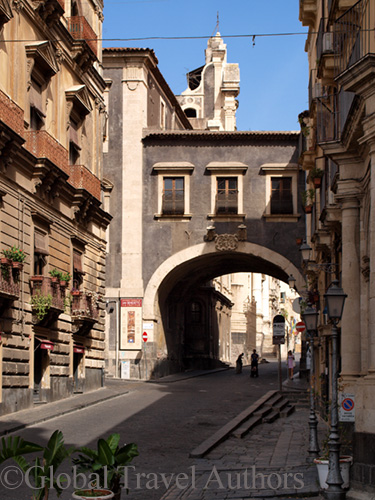 An old abbey in Catania 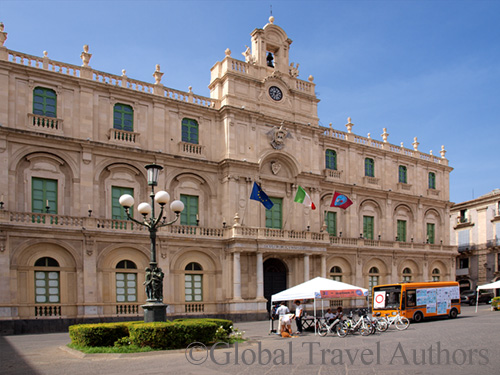 The University of Catania 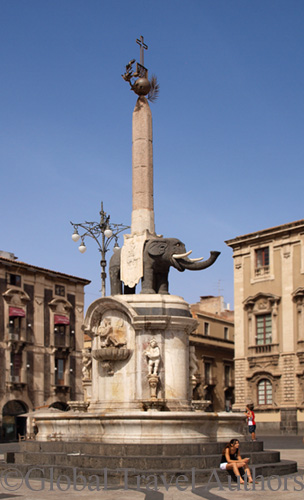 Piazza del Duomo, the Baroque centerpiece of the city, entertains tourists with its amusing Elephant fountain 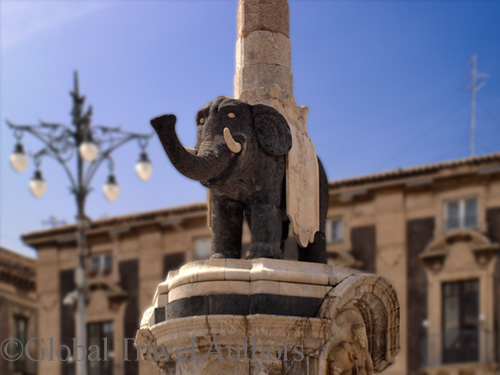 Made of black lava, the Elephant smiles at visitors while carrying an Egyptian obelisk on its back