Masai – the Lost Tribe of Israel 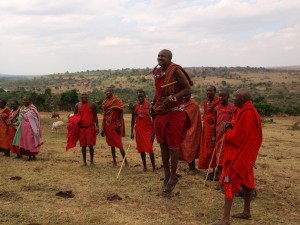 When the Europeans brought the railroad to Nairobi, the Masai were the only human inhabitants there, coming and going as they pleased with their cattle. Nomadic and highly suspicious to any strangers passing through their land, the Masai were never fond of the Europeans. In 1904, M. Merker, a German official-turned scientist stationed in Tanganyika learned the Maa language of the Masai, earned their trust (or thought he did), and collected the legends the Masai cared to share. In these legends of origin, the Masai, according to Merker, maintained that their ancestors were slaves in the land of the Nile and escaped through a parted sea, pursued by a vicious ruler. Long before arrival of missionaries, Merker stated, the Masai knew the tales of Adam and Eve, and of Noah and the Great Flood, though under different names.

“I regard the Masai as being descended from the nomadic Semites to whom the oldest Hebrew pastoralist belong,” pronounced Merker in his study. Lord Churchill called Merker’s Dei Masai “the most truly inspired investigation that ever an African people has had.”  Merker’s study was well-known to the British Colonial Secretary Sir Joseph Chamberlain, who in the early 1900s suggested to Theodore Herzl, the leader of the Zionist movement, that parts of “Masailand” could be handed over to persecuted Eastern European Jews.  In the following hundred years, most researchers concluded that Masai have Nilotic (from the river Nile) rather than Semitic origins, but Merker’s theory of Masai as “one the lost ten tribes of Israel” stubbornly continues to float in popular imagination.

We arranged to go to a Masai village to meet them. They greeted us with singing and dancing, dressed in their best. Unlike other African tribes, the Masai refuse to modernize; they will not drive cars or wear western clothes. A couple of young men spoke enough English to communicate with us.  When asked about their beliefs, they explained that the Masai believe in one God who they call Engai. Engai, they say, has two faces: the first face is a black color, kind and benevolent, bringing thunder and rain, grass for the cattle, and good life for the Masai; the second face is red and fearsome, bringing lighting and drought, famine and death. Engai made the Masai his chosen people and gave them the land of Africa.

The word “Masai” is synonymous with “cattle,” these young people said. They translated a traditional greeting: “How are your wives and children and how is your cattle?” To own one without the other means being poor; to have an abundance of both is to be rich. Cattle do not just give meaning to Masai life, they are life.

As we went around the village, we were told of the traditions curiously resembling those of the Jews: Masai would never eat meat the same day they drank milk; they consider that to be highly unhealthy to both people and cattle whose milk was drank. More important is their firm belief that the milk of the living animal should not be drunk in the village at the same time as the meat of the same animal is eaten.

The Masai do not have chiefs. Instead, their lives are governed by the collective of elders chosen for their wisdom and moral qualities. Their assembly is called Sanhedrin and the round hut where they get together is called a Tabernacle. When a highly respected elder dies, he is buried in the ground facing east. Every passer-by places a stone on the grave as a sign of respect, and after a while a small hill appears on the landscape.

All the Masai wear bright jewelry with colors symbolizing the Masai universe: red stands for blood of a slaughtered animal; white means milk that sustains the Masai; orange stands for milk mixed with blood, a drink that the Masai like and believe to provide strength and nourishment; green is the grass that feeds their cattle; and the blue is the sky above the Masai land given by Engai to his chosen people.

59 Responses to Masai – the Lost Tribe of Israel